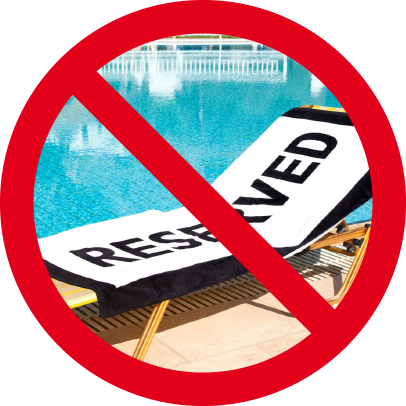 SANTA CRUZ – It is not an uncommon sight for many Spain-goers who stay in hotels during their holiday. The sun loungers by the pool which are occupied from the first moment by towels and anything and everything except people sunbathing. This phenomenon was captured on video and posted on Tik Tok where millions of people watched this Spanish towel war between staff and hotel guests. Watch many more fun videos at the bottom of this article.

Even before the opening of the 'swimming pool area', sunbathers are lining up to lay down their towels on their most popular sunbeds. Anyone who has been to a tourist hotel has already seen it. Popularly, it is often said that it is the British and Germans who reserve it by placing their towel on a sun lounger, while they themselves often use the reserved lounger much later or sometimes not at all.

Some hotels don't tolerate this anymore and have the staff remove the unused towels, which was captured on video by the Tik Tok user below. Not an uncommon sight at many Spanish hotels, but apparently something that many people like to look at.

Incidentally, this is not the first time (and certainly not the last time) that the towel-laying phenomenon has been captured on video. This also happened a few years ago as can be seen below. Do you also want a successful video on your social media, then post the towel war, always a viewing figure gun.