Back with a vengeance: Hogueras parties 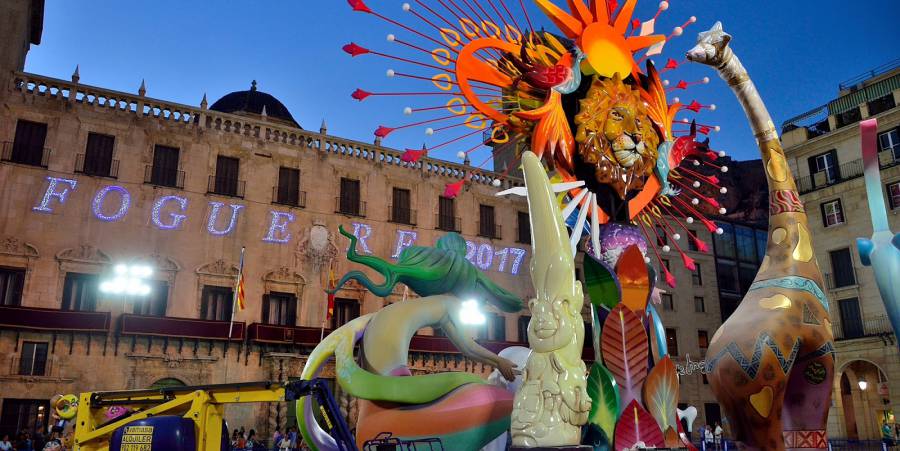 After two years in which it was not possible to organize major parties due to the corona pandemic, the city of Alicante is preparing these days for a new edition of the Hogueras parties. Summer is officially ushered in with these biggest parties of the year in the province of Alicante. The festivities grip the city for a week and are celebrated with even more dedication this year after the forced absence. In earlier centuries, mankind was much more concerned than now with factors such as the seasons, the length of the days, the position of the sun and moon and in general the influence that the elements water, fire and earth had on agriculture and fishing. .

In Spain, but also in many other countries, celebrations were held to celebrate the end of winter, the arrival of the longest day, and more. The role of patron saints was also seen as very important. The party that is celebrated in Spain around the shortest night of the year has been around for many centuries. It is linked to the name day of San Juan, the saint we know as John the Baptist and the patron saint of the city of Alicante. San Juan is believed to have beneficial effects on water and plants. Many an older Spaniard therefore believes that the water on June 24 is extra fertile and beneficial.

In addition to water, fire is also an element that is important in many events in Spain: fire has a purifying effect, so centuries ago it was customary to burn old things at the end of winter as well as at the beginning of summer so that there was room for something new. According to ancient records, pyres were built in June as early as the 16th century. Those pyres consisted of old furniture and old clothes and on the night of June 23-24 - the night of San Juan - they were set on fire, while the children ran around the fire and jumped over the flames. In 1928 it was a a certain José Maria Py y Ramirez who shaped the celebrations of San Juan in Alicante in the form that is still observed today. 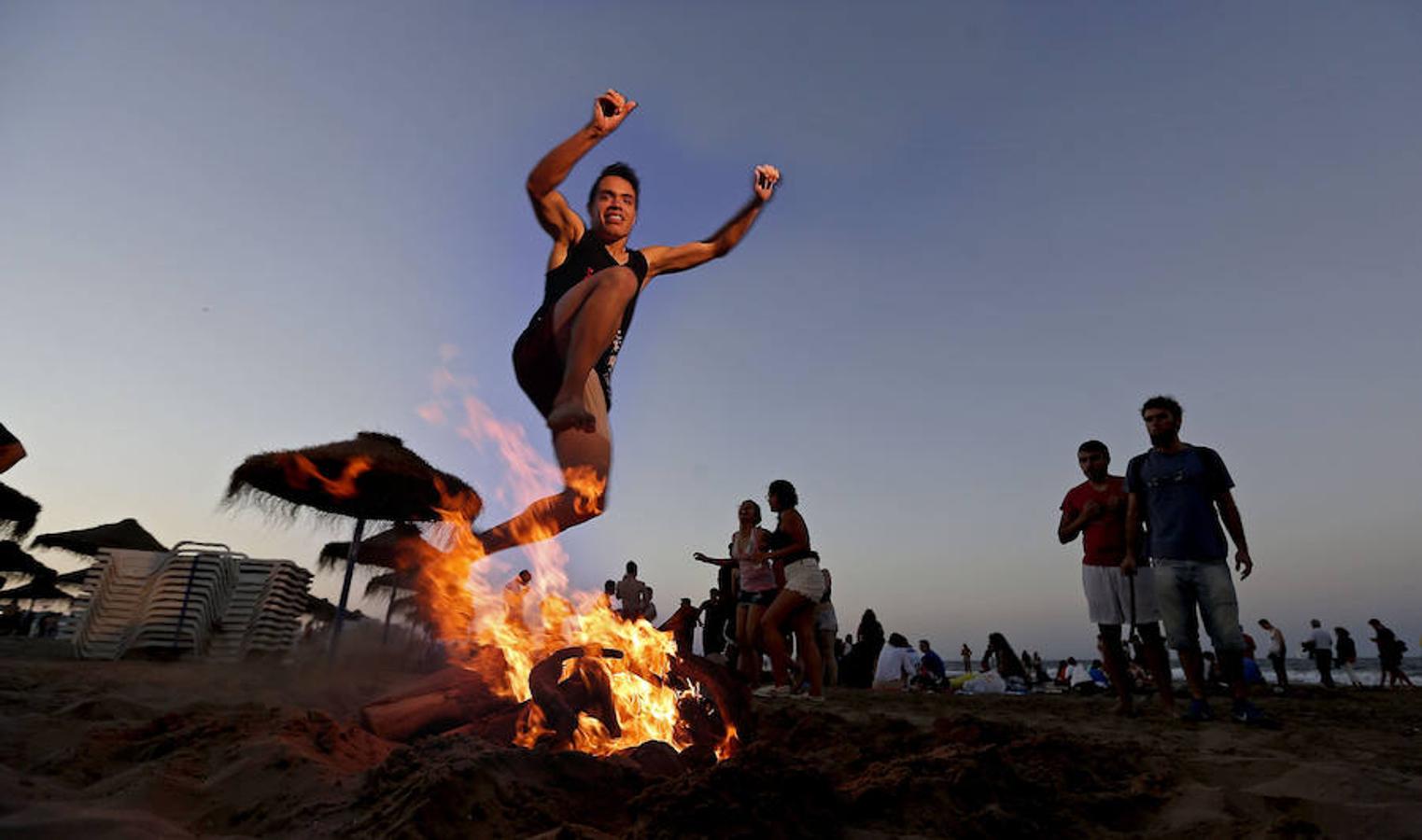 Py had attended the Fallas festivities in Valencia and he introduced a modified version to Alicante. In June 1928, therefore, Hogueras sculptures were created for the first time: creations made of wood, cardboard and papier-mâché, which were placed on the squares of the city. The intention was that in these images the population could express their criticism of persons or events through satire. The statues were then set on fire on June 24. Although the Hogueras (or in Valencian Fogueres) indeed have their origin in the Valencian Fallas, the Alicantines emphasize that their parties are different and above all much more fun. For example, the images are bound by fewer rules than in Valencia and are therefore often more experimental and original.

The parties in Alicante are also less elitist. It is believed that the parties should also be fun for someone who is not a member of a party association and some of the barracas - the party tents placed on the street - are open to everyone. In the barracas concerts take place and food and drinks are served. In Alicante, thousands of people are active members of a party association. They had to see for the past two years how it was not possible to celebrate the Hogueras, but have now been preparing for the 2022 edition for months. They are raising money to pay for the construction of the statue and have lost a capital on their party attire. For young girls, there is no greater honor than being able to represent their own neighborhood as party queen during the Hogueras or maybe even be elected Bellea del Foc (beauty of the fire), as the queen of the Hogueras is called. , which make image groups of the first category or even of the special category. These sculpture groups are made by recognized designers and they cost many tens of thousands of euros. The working-class districts have considerably less to spend and they often make a much smaller group of sculptures, of the fourth, fifth or even sixth category.

Nowadays the statues are made of modern and highly combustible materials, such as fiberglass. The sculpture group is first created as a model and then all parts are manufactured. In the month before the Hogueras, 1 ninot from each of the 89 party associations (an image that is an important part of the sculpture group) is sent to the ninot exhibition in the exhibition hall in the Lonja del Pescado in the port. Here the public can vote which ninot is considered the most successful and this ninot will be removed from the sculpture group on the evening of June 24th before it is set on fire. The ninot is interred in the party museum on the Rambla, where you can see a beautiful collection of ninots from the past century and where you will also find beautiful old posters and photos. 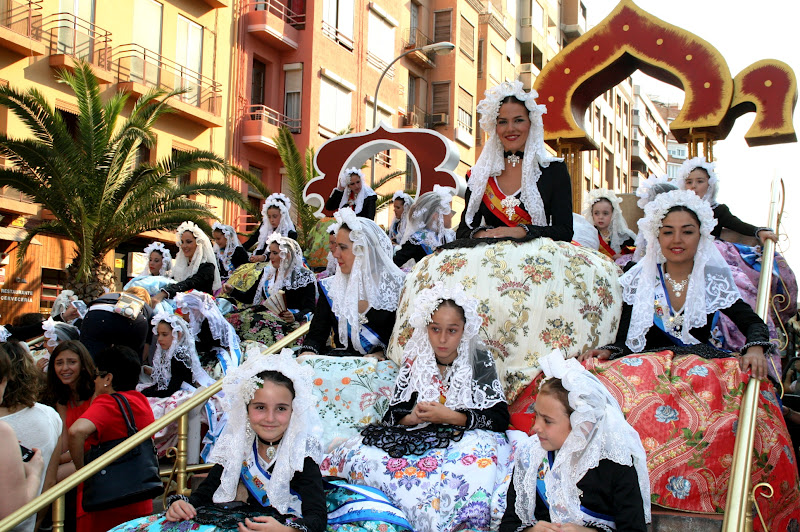 But then the parties themselves: the exact program can be found in our Calendar, but there are a few parts that I want to highlight. From June 16, many streets will be closed because the construction of the dozens of barracas and sculpture groups has started. The build-up should be ready by June 20th and that day it is nice to walk through the traffic-free streets to view the images. It is then less busy than in the following days. From June 18 to 24, there is a deafening explosion (masclet) at Plaza de Luceros every day at 2 p.m. On June 21 and 22, from 7:00 pm, there will be the hour-long flower offering in beautiful festive costumes that ends in the square in front of the concatedral de San Nicolas.

And on June 23 at 9 p.m., the international folkloric parade with beautiful costumes and traditional music, which becomes more spectacular every year, is also a must. with people making small fires and jumping over the flames and the waves at midnight, a habit that should bring prosperity.

And on the late evening of the 24th of June, from midnight, the burning of the sculpture groups begins, starting with the official sculpture group of the municipality in Plaza del Ayuntamiento. Thousands of people are thronging that square, but in fact the entire city is packed that evening. Daredevils come close to the fire and are sprayed soaking wet by the fire brigade. The images burning like torches that are reduced to ashes within fifteen minutes are a sight that you will not soon forget. The Parque de la Ereta, on the castle hill, is a good place to see the fire.